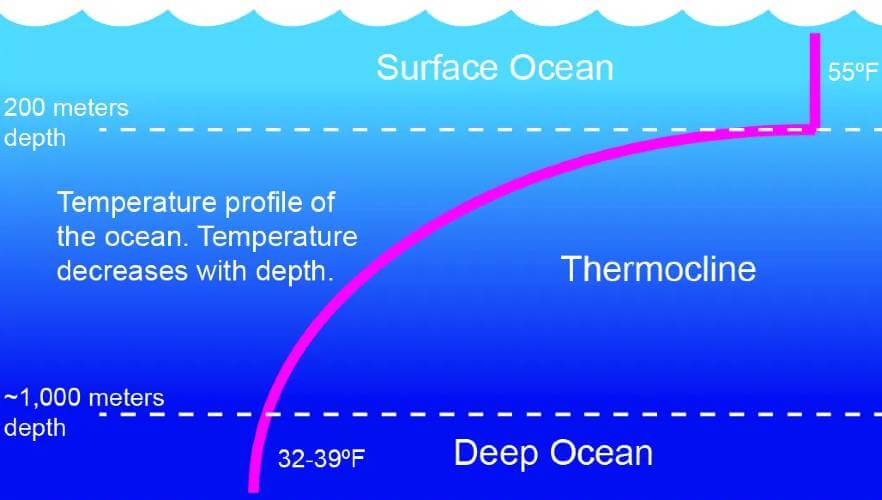 If you’ve been scuba diving or have even taken an occasional dip in a lake or ocean, you certainly must have felt a temperature difference above and below the water surface. But this phenomenon has a deeper meaning and is known as the thermocline.

What is a Thermocline Layer?

Think of it as a gradient between the top and deep layers of water. Thermocline tends to change temperature rather quickly with increasing depth. It is the reason why sunlit water on the surface and cooler deep water never mix.

What is Thermocline Made of?

A thermocline is a water-based phenomenon and is made of water only. The real question stands, how is the thermocline formed?

Sunlight plays a significant role in the formation of a thermocline. It’s what causes thermocline. Sunlight heats the surface layer of water in a lake or ocean, due to which a particular amount of water directly beneath the surface stays warm. Water in the deeper layers of the ocean stays cold because there’s no sunlight to penetrate.

Since cold water is dense by nature compared to warm water, it stays under warm water due to the gravitational pull. This results in the formation of a thin boundary line or border between the less dense warm water and deeper cold water and is known as the thermocline.

Thermocline temperature may vary by several degrees and tends to decrease as you dive deeper into the lake or ocean.

To understand what thermocline is, you don’t necessarily have to dive. An example of the thermocline is a popular drink called the Arnold Palmer iced tea, which combines lemonade and iced tea. If you can’t witness a thermocline in person, prepare this drink at home to see how a thermocline forms. In a glass add ice-cold lemonade (works as deep water), and on top of that, slowly pour warm iced tea and see the transition.

As a result, both liquids separate at a specific point due to temperature differences. The lemonade remains at the bottom of the glass, whereas the iced tea holds on to the top of the glass. The thermocline is where both fluids intermix.

If you stir the drink with a straw, it creates a wind generating wave action, which will cause both fluids to mix, and the thermocline will fluctuate and eventually disappear.

What is Seasonal Thermocline?

It refers to the temporary formation of thermocline that occurs in summers when the water heats up. It starts to diminish in winters due to cooler water temperature at the surface and wind-driven fluctuation.

Seasonal thermocline usually occurs at the beginning of May and erodes by the end of August. The thermocline re-forms every year.

Although thermocline and pycnocline are parts of a single phenomenon, they are still different in nature. A thermocline is the water body that lies between surface water and deep water, whereas the pycnocline is the boundary line that encompasses a thermocline, separating it from the deeper layer.

A pycnocline typically extends to 500 to 100 meters (1600 to 3300 feet) deep. Below the pycnocline zone lies the cold, deep, dark layer, which consists of most of the ocean’s mass. There are very few chances of temperature and water salinity change in the layer below the pycnocline. However, these changes are seasonal for surface water.

The Importance of Thermocline 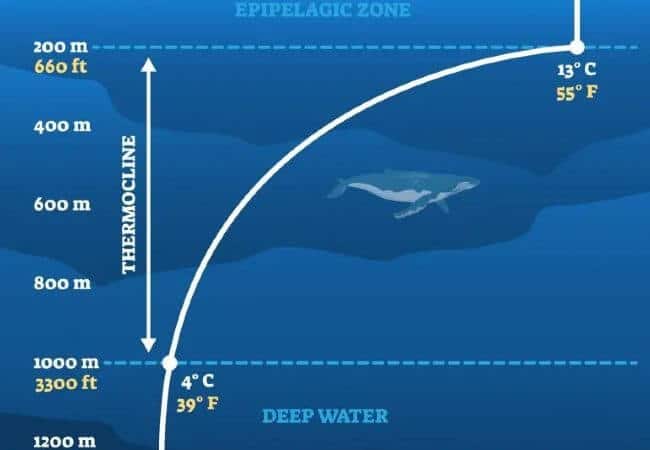 The existence of a thermocline is not just an interesting fact. When hurricane forecasters fear the risk of a hurricane formation, they record sea surface temperature down to the warm depth and the thermocline. They do this because the length of the thermocline in depth is equal to the amount of water that evaporates from the ocean to strengthen the hurricane.

Weather experts monitor semi-permanent and deep thermoclines to predict the formation of common tropical cyclones near the equatorial region where the surface water is usually warm.

Why do thermoclines exist? They’re a natural occurrence that is affected by season and climate change. Humans have no control over the formation or erosion of thermoclines.

How Deep is the Thermocline in the Ocean?

The depth and strength of a thermocline in the ocean vary every season and year. It is semi-permanent in tropical areas, keeps changing in temperate climate regions (mostly deep during the summer season), and has shallow to no existence in the polar regions because the water in these regions is always cold on the surface.

Which Region is the Thermocline Most Developed and Why?

Thermoclines mostly develop in large water bodies such as lakes and oceans. In tropical regions, the sun and climate are often constant all year long, so the thermocline also stays consistent.

Thermoclines tend to fluctuate more in temperate regions because of drastic seasonal changes. In these mid-latitude regions, thermoclines form deeper due to the increase in surface water temperature and diminish in the winter season.

If you’re a scuba diver, you might have swum through a thermocline and never noticed it. As you swim away from the warm surface water, you will feel the compression, and a sudden rush of chilly water will envelop your suit, and that’s where you experienced a thermocline.

From reading about it, a thermocline sounds more like a magical event taking place in large oceanic areas. But as a matter of fact, it is more important than one may perceive, because thermoclines play a vital role in predicting hurricane occurrence.