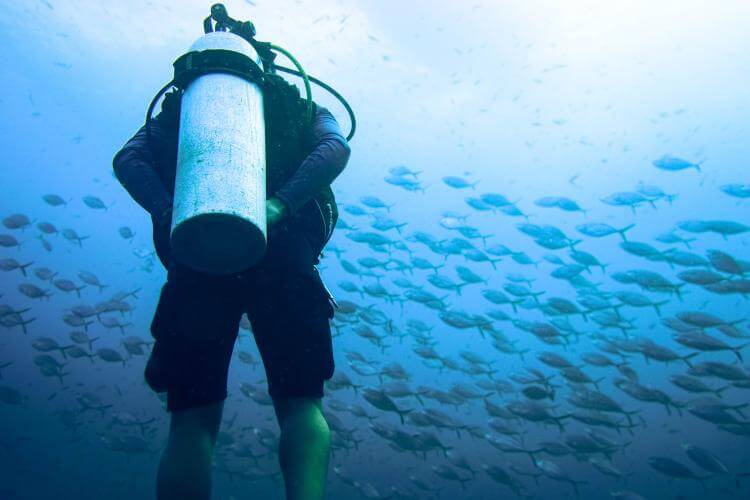 Scuba diving is among the best water activities, with people of different ages and fitness levels participating in it. But, like any other adventure sport, this too comes with its own techniques and challenges. The most important thing in diving is to ascend slowly, regardless of the depth. Moreover, it is even more crucial to ascend slowly when rising from a shallower depth because of the greater pressure change.

Both novice and expert divers need to be aware of the technique used in safely ascending and descending. As a rule, a scuba diver must ascend slowly while returning to the surface. Also, they would require to look above for passing boats to avoid getting run over. Ascending slowly would also reduce your risk of decompression sickness.

In case you are diving with other people, be sure to check on your team members and ensure their safe ascend as well. Coming up safely in scuba diving requires proper know-how of the procedure. This brief guide will take you through the steps involved in properly ascending.

What Happens if you Ascend Too Fast While Diving?

Ascending quickly while diving can adversely impact your health. It increases your risk of developing Decompression Sickness (DCS). This may lead to tingling sensations in your legs and arms, with painful joints which is the most prominent symptom, and death in extreme cases.

While diving, your source of air in your tank contains a mixture of around 21% oxygen and 79% nitrogen. This composition is similar to normal atmospheric air. While breathing, our bodies exhale out nitrogen and inhale oxygen.

But this process becomes more cumbersome as we go underwater due to the increased pressure. As a result, you may not be able to exhale nitrogen on time, allowing it to get absorbed in your blood cells. However, this is fine when released slowly. The real trouble begins when we ascend too fast. It causes the absorbed nitrogen to bubble out of the bloodstream under pressure. This, in all likelihood, will cause decompression sickness and diagnosing DSC is very important.

Some common symptoms of DCS:

How Fast To Ascend When Scuba Diving?

While making an ascent, it is important to begin as early as possible since it will take considerable time before you reach anywhere near the surface. You should be aware of your tank’s oxygen levels and obstructions in your surroundings, if any.

The safely will also largely depend on the rate you ascend at. You can closely monitor your ascent rate by using a diving computer or watch. Make sure that this rate is properly visible to you before you start going up.

When coming up from a deeper depth, take care not to go beyond ten feet per minute. This is because rushing would expose you and your dive partners to an increased risk. Once you get closer to the surface, there will be more variations in the pressure. This is why divers are often advised to be extra cautious the last twenty feet.

Many drivers tend to rush closer to the surface out of the excitement and relief of getting to the surface. This may lead to several mistakes. Also, the increased pressure levels at shallow depths raise the risk of injury. As a result, you must take your time till the last length of ascending.

While diving in a group, divers communicate their ascent plan using hand signals. Here, you should begin ascending only after confirming with your dive buddies. Using simple thumbs up or down hand gestures can let you know if your peers are ready for the ascent or not. Diving buddies can help each other out and assure maximum safety, given that they communicate well.

Before you start moving, you’d need a minute or two to scan the surface above you for possible debris and other blockages. After making sure of a clear pathway and confirming with your buddies, you are all set to go.

Why Do Scuba Divers Ascend Slowly?

The short answer is that scuba divers ascend slowly to ensure a safe, injury-free ascent. Moving up slowly will not only prevent uneasiness from Decompression Sickness but also give you sufficient time to communicate in case you see an obstruction.

Now that we are done with the why, let’s address how to ascend safely from a dive.

Keep the following steps in mind for a safe ascent.

1. Watch out for boats on the surface

You would definitely not want to be crushed under a boat when you finally reach the surface. Look for possible boat shadows on the surface above you, and move to a different place if you do.

You can also listen to engine or rowing sounds coming from boats and motors. Wait a while to allow the boat to pass you by. If the sound persists, it’s better to move to a different spot.

You need to inflate your Delayed Surface Marker Buoy (DSMB). Then release it to highlight your chosen ascent spot. This acts as a warning for people and boats to keep the area clear. Otherwise, you can place a diver flag above you. Just make sure you stay close to it.

3. Decide on a safety stop

Decide upon a safety stop before you start coming up. Generally, it means staying at 5 meters or 15 feet in depth for a duration of around 3 minutes. This would allow your body extra time for unloading the nitrogen absorbed during the dive.

Right before ascending, use your left hand to hold your inflator hose. Then place your fingers on the deflate button. Start kicking up slowly while you continue to release air from the Buoyancy Control Device (BCD).

5. Deflate your BCD for it to stop expanding

If you are ascending quickly, try slowing down your kicks and release air from your BCD.

Make sure to monitor your ascent rate using your diving computer. It is best to follow the rate suggested by your computer. In case you’re going too fast, your monitor will begin beeping to warn you.

7. Use your right arm to protect your head

If you face obstructions, even after scanning the area above you, you would need to act on the spot. The easiest method is to raise your right arm above yourself to safeguard your head and the rest of the body.

8. Inflate while on the surface

Before breaking the surface, your left arm must be on the inflator hose with your finger on the inflate button. You must inflate your BCD completely while on the surface.

Scuba diving is a fun, yet safe adventure sport, given you follow its rules. Among the most important things to keep in mind is to ascend slowly. This prevents your body from building up the absorbed nitrogen in your bloodstream.

Plus, going up too fast may end up in a painful decompression sickness. However, this is a possibility rather than a guarantee. In any case, it is better to be safe than sorry, so you must follow the above-mentioned tips while scuba diving.