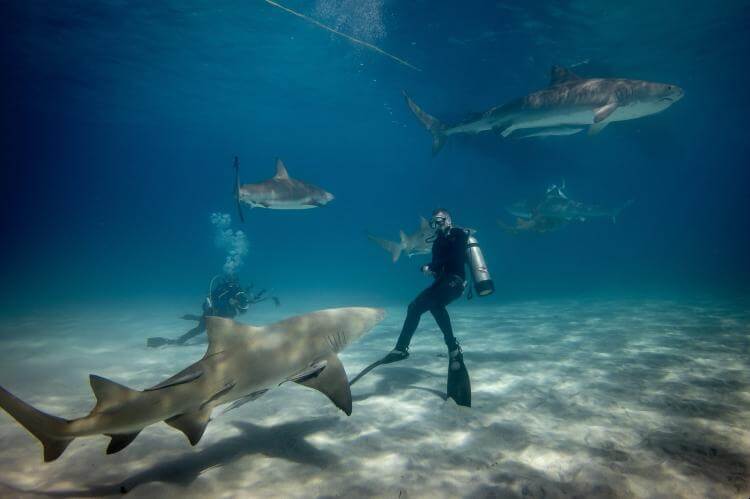 Diving in the turquoise sea, amongst the coral reefs, meeting tiny fish and the adorable turtles, and visiting some of the most interesting locations underwater is a thrilling experience.

However, most scuba divers and sea lovers have several fears and hesitations before diving. One of the most feared factors is an encounter with deadly marine creatures, specifically sharks!

Did you know that there are 70 to 100 shark attacks on humans annually? This fact explains the concern of most divers.

If you are a scuba diver and fear shark attacks, you have stumbled upon the right place. In this article, you will learn about shark behaviors, how to avoid a shark attack and what to do if you see a shark while scuba diving.

Why Do Sharks Attack?

To prevent yourself from being a shark attack victim, it is essential to understand why could a shark attack in the first place? Moreover, it is important to study the behavior of sharks to find ways to avoid their attacks.

Sharks attack for various reasons; however, most are due to provocation. If a diver feeds or grabs the shark or accidentally follows one, it may attack as an instinctive defense response.

If the attack is unprovoked, then it must have happened due to confusion or curiosity.

A ‘confused’ attack occurs when sharks mistake humans with their prey. Although, sharks do not consider humans as food. Sometimes, humans resemble their prey, and this might result in multiple attacks.

Sharks are curious about their environment, just like any other creature. They tend to investigate their surroundings using their mouths. A shark may bite if it can’t distinguish the diver as a human.

The bottom line is sharks attack mainly for two reasons – curiosity or confusion. They rarely attack humans due to aggression. They attack when they perceive evident danger, such as a human attacking them.

What to Do If You Encounter a Shark While Scuba Diving

If you have watched films about sharks, you must have noticed that they get portrayed as savage monsters who brutally kill their prey. However, this is not true; they have only been depicted as such to add an element of excitement. Sharks are nothing like that and are curious marine creatures.

1. Remain Calm and Stay with Your Dive Buddy

Sharks tend to close in and observe divers due to their curious nature; after being assessed, they swim away. It is extremely rare to see a shark, but stay calm and stick with your dive buddy if you do.

Humans look larger in water due to their diving gears. If you stick close to your diving partner, you will look even bigger. Your presence may not be confused with a prey. Sharks stay in the local area sometimes because of fishing activities.

They get easy meals when they locate themselves closer to the fishing activities.

It goes without saying, any creature respects you if you respect them. Do not try to provoke them by grabbing or harassing them.

As nurse sharks, leopard sharks, and horn sharks usually swim sluggishly close to the seafloor, divers try to approach them and tend to touch them. As a defense, the shark may bite, not aggressively but as a warning to fend the diver, who it considers as an aggressor.

Therefore, it is best to maintain a respectful distance when you encounter a shark.

3. Do Not Swim Away Rapidly

When a prey feels the presence of its predator, they move away swiftly.

Sharks do not consider humans as food. Therefore, if a shark is near you, it will certainly not attack you directly, perceiving you as its food.

If you swim away rapidly, you confuse the shark, and it may perceive you as its prey. You cannot outswim a shark for sure, so stay where you are and do not make any sudden movements to scare or confuse the shark.

Let it explore the surrounding, and it shall go away sooner than you expected.

Now that you are aware of what precautions to take, let’s explain how to avoid a shark attack when scuba diving.

The key to dive in any zone inhabited by different creatures is to be attentive. As you have entered their habitat, they attempt to defend themselves and their territory, sometimes in unpredictable ways. Therefore, if you are attentive, you will be aware of the dangers and which areas to avoid.

If there are steep drop-offs or sandbars, chances are sharks may be lurking, as it is easier for them to hunt. You may find a shark near the surface of the water too. Therefore, it is extremely crucial to pay attention; you will minimize the chances of being attacked.

It would be best to avoid diving at certain places or times because of the chances of meeting a shark. Firstly, they hunt at dawn or dusk. Hence, you should avoid diving at those hours as they may confuse you as prey.

Make Yourself Look Big or Small

Making yourself appear bigger or smaller depends on two main factors. If the shark is not encircling you, then it has no interest in you. Stay put and attempt to curl yourself, presenting yourself as harmless; get closer to your dive partner or the reef.

If the shark gets curious and starts circling you, you should stretch yourself and extend your hands above your head; this will make the shark aware of your size and deter an investigative bite.

Sharks prey on smaller fish, and the fishes have shiny scales. Hence, it would be best if you choose your diving suit wisely. You do not want to attract a shark because it is confused by the color of your suit.

Avoid wearing jewelry as it shines and glimmers and it may attract sharks. Select the color carefully; wear black or dark blue, and avoid wearing high contrasting colors.

Sharks, because of their predatory behavior, are likely to attack divers who dive alone. If you dive with a buddy or a group, the chances of being attacked by a shark get significantly reduced.

Avoid Being on the Surface

Things on the water’s surface are often sick, dead, or debris that can attract small fish. Therefore, sharks tend to hunt close to the surface, and anything on the surface will attract them.

So avoid being on the surface of the water. If you have to be on the surface for some reason, try to keep your head underwater to see if a shark is approaching you.

Watch Out for Warning Signs

Sharks do not generally give warning signs. However, if they do, then watch out for any agitated behavior. If a shark is making jerky movements, entering fast bursts of speed, lowers its pectoral fin, and makes exaggerated side-to-side head movements, it is most likely feeling threatened or stressed.

If you notice this behavior, try to be as subtle as possible and stop doing any movement or activity that may get perceived as threatening.

Tiger sharks and many other types of reef sharks only attack if they have the element of surprise. Therefore, if you maintain eye contact with the shark, you will be making it clear that you can see the shark.

Swimming in murky water is inviting trouble. It is difficult to watch out for sharks looming below. Moreover, they will not be able to differentiate you from prey. Therefore, it is best to avoid murky water at all costs.

Dive Only If You Have Training

Last but not least, you should only dive if you have the necessary training. Scuba diving requires formal certification, and only a professional can teach you how to deal with situations such as a shark attack. 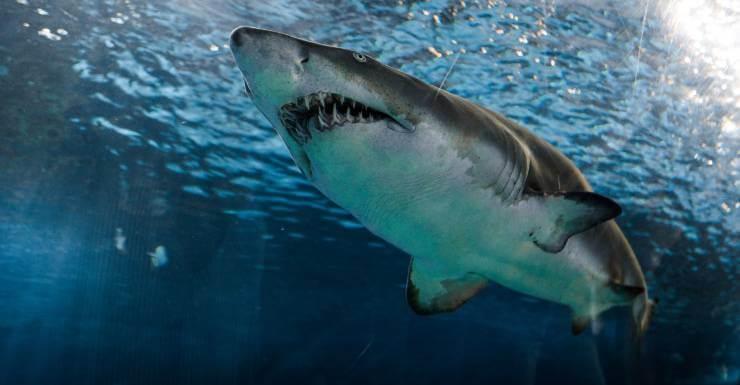 You can avoid shark attacks when you are aware of the reasons that can provoke them. Here are the types of attacks.

Provoked attacks are when humans touch sharks. In addition, if divers try to grab them or feed them, sharks attack in defense.

What Are the Chances of Seeing a Shark While Diving?

Similarly, if you dive during the breeding season, you are likely to encounter a shark.

If you have taken all the precautions and chosen a time and spot that is less likely to have sharks, your chances of avoiding a shark are increased.

In numbers, the chances of getting attacked by a shark are one in four million. Therefore, you should just enjoy your dive and not worry much about being attacked.

Why Do Sharks Not Attack Scuba Divers?

The chances of being attacked by a shark during scuba diving are minuscule. The reason is that scuba divers interact with sharks; they make their presence more prominent. While surfers and swimmers cannot be easily differentiated from prey as they are on the surface of the water.

Moreover, sharks don’t consider humans as food. They are aware of humans and only attack when they feel threatened or confuse people with prey.

Sharks are natural predators and not monsters of the deep blue sea. Unlike what they are perceived in movies, as always hungry savage monsters, they are just curious creatures who want to explore their environment and make sure that it is safe.

If you are still afraid of sharks when you go for your next dive, just remember, there are about 500 different species of sharks, and only 30 of them have reportedly attacked humans.

Sharks only attack if they sense provocation. If you respect them, they will respect you too and not attack you.