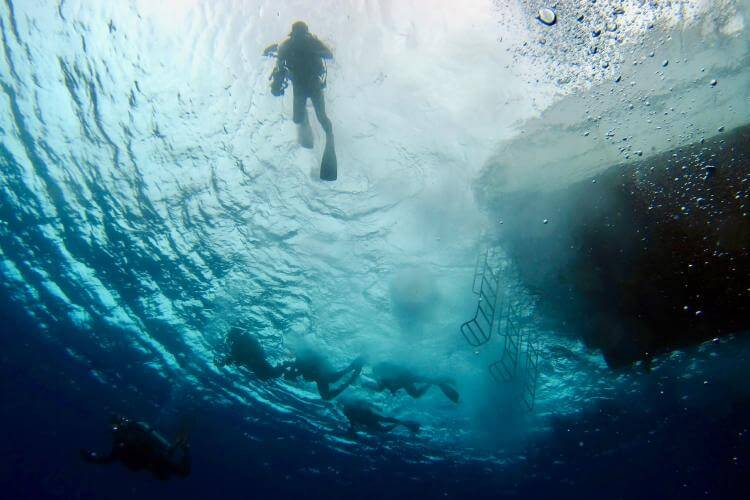 So, the natural trajectory dictates that most divers dive in salt water marine environment. In contrast, people residing in a landlocked area or country are certainly limited to partaking in freshwater diving due to the lack of an alternative.

Of course, there are differences between saltwater and freshwater diving. Generally, elements such as the sights underwater propel the decision of divers.

There is more to what meets the eye – saltwater and freshwater have many differences. This article will give you valuable insight into scuba diving in saltwater vs. freshwater. Without further ado, let’s get to it.

What is the Difference When Diving in Saltwater and Freshwater?

The salt content is not the only difference between fresh water and salt water. Many factors differentiate the two from one another.

The marine environment seen by scuba divers is undoubtedly the most exciting part of diving. Nevertheless, it is important to be mindful of the weather conditions, especially diving in saltwater.

Saltwater dives usually start out from boats. You will have to conduct thorough research, depending on kind of dive you plan to do, to ensure the safety on the day. Moreover, saltwater dives can take up to a few hours or days of travel to reach the perfect diving spot.

Visibility is better in saltwater when diving as compared to freshwater. Saltwater has a sandy bottom that can impair visibility – as the bottom will be disturbed. However, it is still better than in freshwater.

When you dive in freshwater, the bottom is likely to be covered in mud or more static particles – as freshwater has fewer to no currents. So, when a freshwater bottom is disturbed, it can impair visibility excessively.

If experiencing aquatic life is the biggest factor influencing your decision, it is better to opt for a saltwater dive than a freshwater one. There is obviously a lot more animal diversity in the ocean than a lake.

Not only that, freshwater bodies are relatively smaller and less vibrant.

Saltwater diving is dependent upon weather conditions. The ocean or sea will have more currents that will increase the diving difficulty.

As we all know, rivers flow only one way, making it easier to dive into. Furthermore, freshwater bodies experience low currents because currents are generated only due to formations on the rocky bottom or the wind.

Additionally, lakes are entirely still because they are isolated and not exposed to tides. That makes diving relatively easier.

Do Things Float Better in Salt Water or Fresh Water?

Let’s look at it this way – if you have ever been to the ocean, it might have been easy for you to stay afloat. However, doing the same in a swimming pool is slightly more difficult. What causes the buoyancy difference between fresh and salt water?

We see a disparity in staying afloat in two different water bodies, because of the presence and absence of salt. Basic science has taught us that objects float easily on a dense surface.

So, the salt dissolved in ocean water contributes to the mass of water. Thus, making the water dense. As and when the density of water increases, it becomes easier for objects to float.

As freshwater has a lower density, objects face difficulty in staying afloat. To sum it up, things certainly float better in saltwater than in freshwater, owing to the greater saltwater density.

Objects staying afloat (or not) highlights the difference in buoyancy between salt and fresh water.

To answer this question – saltwater weighs more than freshwater. As mentioned above, when we dissolve salt in water, the density of water increases.

A cubic foot of freshwater weighs 62.4 lbs, whereas the same quantity of saltwater weighs 64.1 lbs. Of course, the difference in weight arises from the presence and absence of salt in the water.

The water molecules wrap themselves tightly around the salt particles leading them to stay closer together. So, when we add a cubic inch of salt to any volume of water, the water volume increases by slightly less than a cubic inch.

A simple explanation of the Archimedes’ Principle tells us that applying an upward force on any submerged thing or object makes up for the weight of the water displaced.

Since saltwater weighs more than freshwater, a greater upward force gets exerted on the submerged object. Saltwater weighing more also explains the buoyancy difference between salt and freshwater.

Multiple factors such as visibility, buoyancy, currents, and aquatic life influence a diver’s decision to pick the perfect location to dive in. While it is easier to dive in a freshwater, you can only enjoy the natural and authentic aquatic life in saltwater. The same, however, comes with its risks.

I hope that this article addressing freshwater vs. saltwater diving has helped you understand the key differences between the two. Make your decision wisely and have a safe diving experience.