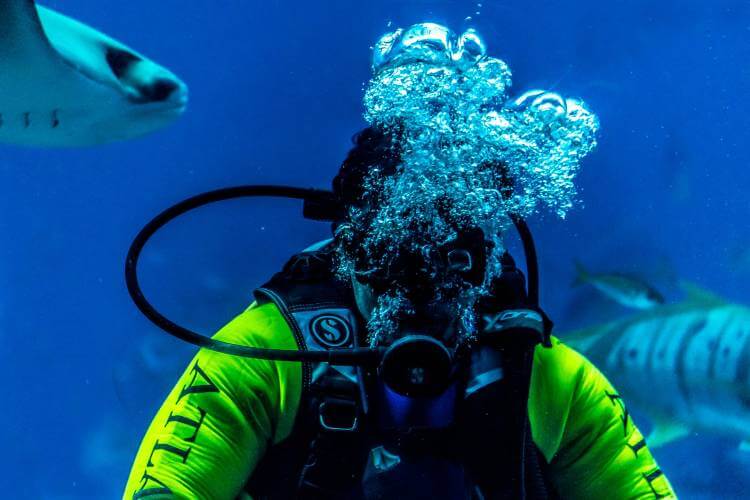 Ever heard of people talking about getting “narced” during a dive and felt confused? It is a condition that sometimes arises due to scuba diving.

Nitrogen narcosis, also called Inert gas narcosis, Rupture of the Deep, or the Martini effect (because it feels like diving with Martinis), is experienced by deep-sea divers as they descend past 100 ft.

Let us understand this phenomenon in simple terms. The air on land is a combination of different gases. However, we breathe in only oxygen and release carbon dioxide. Gases like nitrogen do not appear to have any effect on us when we are on land.

While diving underwater, the force of the water on us increases the pressure of the gases we breathe. These gases now have a more concentrated effect. Now, our bodies are great at getting gases into the nervous system. So the nervous system becomes the most affected body part.

The gases interfere with the way messages are passed around in the nervous system. It impairs the body’s ability to think because the connections in the brain are affected. Movement is also slowed down because the messages that are being sent from our brains to our muscles are also affected.

Nitrogen narcosis is generally experienced when a diver goes lower than 100 feet, or 30 meters. However, if you plan to dive below 60 feet, be prepared to experience any of the symptoms. You should be able to identify the signs in order to avoid any catastrophes.

Divers experience different symptoms at different levels of depth. Here are some common observations. You should be looking out for these symptoms while diving.

It is not recommended to go very deep, as extreme depths may even put you in a coma or lead to death.

At a depth of 100 ft, the air being breathed on by the diver is four times denser than the air at sea level. Likewise, the quantity of nitrogen is four times greater. The nervous system and the brain have high lipid content, and nitrogen is absorbed by lipids much faster in comparison to other tissues. Subsequently, when a diver breathes in such a high concentration of nitrogen, the nervous system gets saturated with inert gas, and normal functions are impaired.

Nitrogen narcosis and the bends may sometimes be confused with each other. However, the two are pretty different. Even though both arise from the involvement of nitrogen in scuba diving, they are different conditions. We already know that ‘Martini effect’ is. Let us take a quick look at the bends.

What are The Bends?

Also known as decompression sickness, this is caused by nitrogen bubbles forming in the bloodstream and tissues of the body. These bubbles are formed when the diver ascends very quickly from a great depth. It can also happen if the diver does not carry out decompression stops at the appropriate depth and correct time during ascent.

The bubbles form because the pressure of the surrounding water decreases as the diver ascends. If the ascent is too quick, the pressure falls quickly, releasing nitrogen and creating potentially deadly bubbles.

How are the two different?

The main difference is that narcosis is brought about by descent, while bends occur during the ascent of the dive. Nitrogen narcosis is caused by dissolved nitrogen, whereas the bends are caused when nitrogen is no longer dissolved and forms bubbles. Nitrogen Narcosis can be experienced during the beginning of a dive. In contrast, bends occur at the end of a dive.

The two are also different in terms of their effect. Nitrogen narcosis affects the brain. The bends, however, can affect any part of the body. Another thing to remember is that the bends can happen even after a dive, back on the surface. Narcosis, on the other hand, can occur only during descent.

While nitrogen narcosis is usually temporary, it can sometimes have long-lasting effects. Divers can become too disoriented to swim in shallow water, in some cases. They can also slip into a coma while underwater.

Some commonly observed effects of narcosis are:

If you are experiencing any of these effects after diving, you must immediately get them checked. If not treated at the right time, gas narcosis may be fatal. It is essential to keep a check on your health.

While nitrogen narcosis may come across as a scary condition, it does not mean you have to give up on scuba diving altogether. With appropriate safety measures in place, you lower the chances of experiencing narcosis. Be careful and do not go very deep if it makes you uncomfortable. Put your comfort over everything else, and you should be able to enjoy the beauty underwater. Happy diving!