The first and most important concern of any scuba diver is receiving oxygen, which is obtained from an air tank. However, many people aren’t aware that the air stored inside the tank isn’t suitable for inhalation. This is because the oxygen there is extremely pressurized.

In that case, a device is needed to make the air suitable for breathing. This device is called a scuba diving octopus regulator. Let’s take a look at what a scuba octopus is all about and how to do a scuba octopus setup the right way.

What is an Octopus in Scuba Diving?

A scuba diving octopus regulator (also called an underwater diving octopus) is a device that is capable of regulating the air inside an oxygen tank.

A scuba octopus closely resembles the tentacles of real creatures (hence the name “octopus”) because of the many hoses and tubes that emerge from the initial stage and envelop around the divers like feelers.

Components of the Underwater Diving Octopus

A diving octopus is mostly made of four different principal components. It is a setup of connections consisting of two regulators, one dive gauge, and one inflator hose.

Setting Up a Scuba Diving Octopus

The scuba octopus setup can be separated into two different processes. They include:

Setting Up Your Scuba Regulator 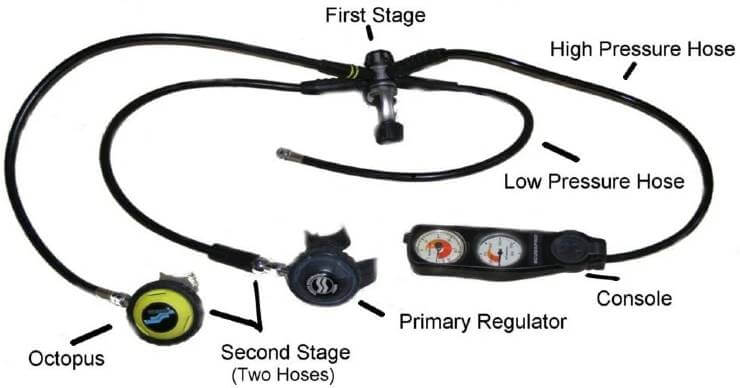 Before you commence to assembling the scuba regulator, I advise educating yourself first about the different components and their functions. They are as follows:

The first stage is the part of the scuba regulator where the air pressure is lowered before it is transported to the second stage. It can be described as a cylindrical-shaped metal and is the area where the adjustment of air pressure takes place. It is sometimes referred to as an “end” point of the diving octopus. This is because the first stage is where both regulators, the dive gauge, and the hose are all connected.

The yoke (also known as the DIN) is responsible for connecting the main body of the first stage and the scuba tank. It usually comes with an object called the “yoke screw” whose function is to firmly fix the regulator piece to the scuba tank.

The function of the all-important dust cap is to prevent water from entering the main body of the end of the octopus (i.e the first stage). This small cap is made of rubber which is usually present at the first stage of the regulator’s opening. The york screw is also needed in this situation to fix its position.

Located on the body of the first stage are numerous ports & port plugs. These are usually the sites where the various hoses are to be connected to the first stage. They also act as seals for when the hoses are not in use.

Divers often observe that more holes are present than necessary. This is not a design flaw. Instead, it allows the user to pick the position for the hoses that they feel most comfortable with.

The part of the regulator which enters your mouth is known as the second stage.

The main function the primary second stage carries out is the second and final stage of the reduction of air pressure that was begun in the first stage. It does this by transforming the air into ambient pressure which is finally breathable.

It is made up of these parts:

Its position is on the primary second stage regulator’s face. When the purge option is used, it allows air into the second stage chamber.

The breathing ease adjustment is the means through which divers can modify the breathing resistance by the use of a simple lever.

The breathing ease adjustment is a very important part of the second stage because without it there wouldn’t be any breathing resistance. Instead, with its absence, there would be a free air flow where the diver would not be able to control the continuous overflow of air into his mouth.

This valve is used to guide the flow of the bubbles exhaled by the diver away from his or her face.

We tend to avoid a blocked view in most activities, and diving is no exception to this rule. The exhaust valve is located just underneath the mouthpiece.

A mouthpiece is the what divers put in their mouths to receive the oxygen that is coming from the tank while underwater.

An alternate second stage (also called the buddy regulator) has an identical role as the primary second stage, but is generally used as a backup.

The alternate second stage has an LP hose used to transport the air from the initial stage because it operates identically as the primary second stage. This hose is usually longer when compared with the direct hose, and is so for the purpose of simpler access during emergencies.

This part of the scuba regulator is usually utilized during emergencies as an important backup (i.e whenever someone runs out of oxygen).

4. The Submersible Pressure Guage and Console

The submersible pressure gauge (SPG) is used to measure and monitor the amount of air left in a diver’s oxygen tank when underwater.

The SPG works when attached to the initial stage by use of a hose with high-pressure abilities. High-pressured air is sent through the hose from the tank straight to the gauge.

The submersible pressure gauge may also include a console on which there may be a depth type of gauge or a dive compass.

Intermediate pressure is fed into the buoyancy compensator (often called BCD) right from the first stage through the low-pressure inflator hose. The purpose of this is to give the diver the option of adding air directly from the oxygen tank to the BCD.

The sleeve is a device used to connect the LP hose to an buoyancy compensator inflation mechanism, although it needs to be held back when the hose is attached to an inflator.

The attachment opening is used in connecting the low-pressure hose to a BC inflator. They come in various sizes.

Steps to Assemble a Scuba Regulator

Here are the steps to assembling a scuba regulator:

Step 2: Detach the Plugs from the First Stage

Although the primary second stage usually comes attached to the first stage, you still need to connect the alternate second stage, the low-pressure inflator hose, and the SPG yourself.

Therefore, right next to the primary second stage, you need to remove one low-pressure plug for the alternate second stage.

The alternate second stage should be connected right next to the primary second stage. You do this by placing it on the low-pressure plug in the first stage and screwing the hose into the plug using your hands.

All the hoses can be properly and tightly fastened using a wrench once you’ve connected all of them.

Step 4: Connect the SPG and the LP Inflator Hose

On the opposite sides of the primary & alternate second stages – first, connect the low-pressure inflator hose to a low-pressure plug.

Next, screw the SPG into the high-pressure plug right next to the LP hose using your hands.

Using the wrenches that best fit the bolts, tighten and secure the connection of the hoses.

You should tighten it enough that it won’t shift, but not too much or they will get damaged.

Once the connections are complete you should check for leaks by connecting them to an air tank. Pay attention to any hissing noises.

If there are any, then there’s a leak somewhere. This means that you must disassemble everything you’ve done and start over. There can be no mistakes with your connections.

Connecting the Regulator to the Oxygen Tank 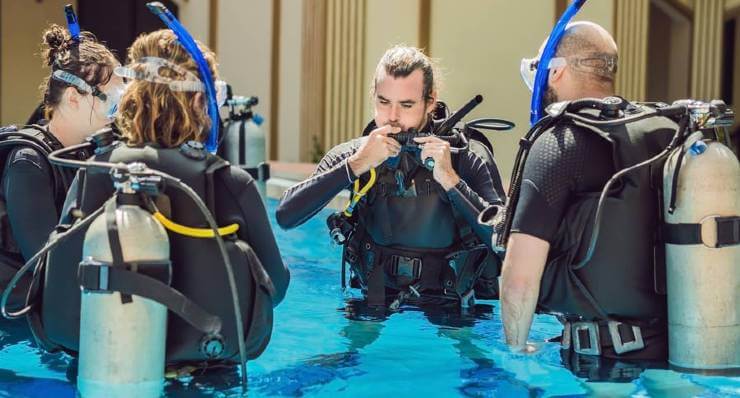 Once your scuba regulator is good to go, you need to connect it to the oxygen tank. This can be done in two stages.

1. Connect the Buoyancy Controlled Device (BCD) to the Tank

By using the straps at the back of the BCD, attach it to the oxygen tank.

2. Connect the First Stage to the Oxygen Tank

The next step is to connect the first stage to the oxygen tank.

While scuba diving regulator setups can be complex, they are also very reliable.

The scuba diving regulator setup explained in this article will be of lasting use to you, but only if you give your regulator the care it needs. The underwater diving octopus has to be kept well-serviced and maintained.

You can get your dive gear looked at in any local dive center for any servicing you need. It should be given general maintenance at least once a year. This is often referred to as a “tune-up”.

A tune-up involves the complete inspection, disassembling, and sometimes even replacement of your gear. It is a complicated process and a lot of work has to be put into it.

You rely heavily on the equipment when you scuba dive. For you to maintain a sufficient level of safety, it is advised that you avoid any possible emergencies. It is crucial to have your gear regularly serviced and checked by people who you are sure are professionals.

If your diving gear is used seasonally, I advise having your scuba diving regulator octopus set up and serviced before it is locked away for storage. This helps to prevent any salt damages that occur while the equipment is not in use.