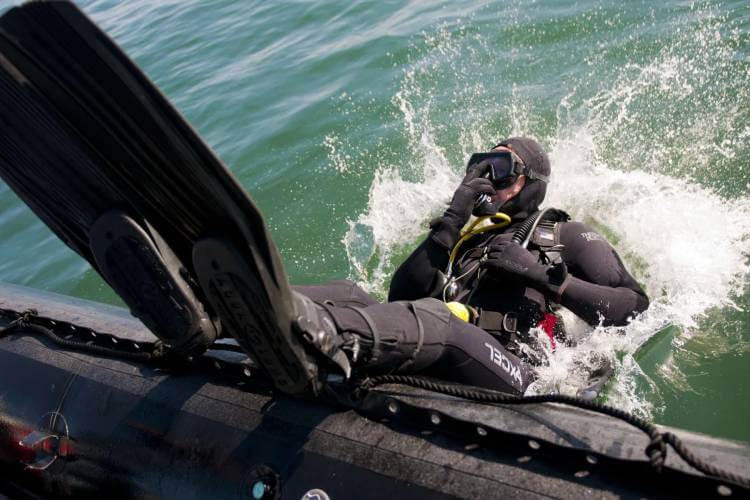 We are all aware of the nature of scuba diving, but do you know anything about its origin? Do you know what does the SCUBA acronym mean?

Well, let me clear this up. Scuba is a word derived from the acronym SCUBA that stands for Self-Contained Underwater Breathing Apparatus. It is one of the instances when an acronym is actually converted to a word we now widely use.

So let me dive in and go through a bit of the history of scuba diving.

The history of diving underwater and exploring the aquatic world dates back centuries. In early Greece and Rome, people indulged in diving underwater by holding their breath. From the diving bell to snorkeling to our modern-day scuba diving equipment, we have come a long way.

Around the 16th century, people used diving bells that would supply air from the water’s surface, which allowed people to stay underwater for a longer duration. Most of the deep-diving types of equipment was later designed for military and scientific purposes. This scenario completely took a turn with the advent of the ‘Aqua Lung‘.

By 1942, Jacques Cousteau and Émile Gagnan invented the famous ‘Aqua Lung’, a turning point in their profession and a breakthrough device for diving. Due to the arrival of the new equipment, people were more curious to explore the deep waters for recreation and fun.

With this, more people became aware of underwater exploration, which led to the opening of numerous diving schools.

Where Did The Acronym SCUBA Come From?

Dr. Christian Lambertsen coined the acronym in 1954 while working on the prototypes of re-breathers for military services. He had designed this mainly for the frogmen (trained for scuba diving for military work) during the Second World War.

SCUBA is an acronym which was referred to as the oxygen apparatus for the divers during ancient times. In the modern-day term, Scuba refers to the water sport that we all love. With the emergence of science and technology, there have been significant changes over the years.

Scuba equipment has made divers’ lives easier and has made diving possible for thousands across the world.

Diving is not just a sport for pleasure and exploring the sea, but is also a great responsibility. Your life is dependent on the gear and equipment available with a good amount of training.

When you are involved in something new, learning a few terms and jargon related to it is crucial. The same applies to scuba diving as well. There is a handful of glossary terms and technicalities that we may have to learn to understand it better.

Below is a list of some important acronyms with their meaning to help you speak the scuba language:


Scuba diving is one of the most adventurous water sports that many people have on their bucket lists. With the development in science and tech, we have new and improved equipment to make our diving experience smooth and more enjoyable.

Underwater exploration is something that many of us dream of. With partly being adventurous, it can be dangerous at the same time. With appropriate training and understanding of the underwater world, you can enjoy every bit of the deep blue sea.