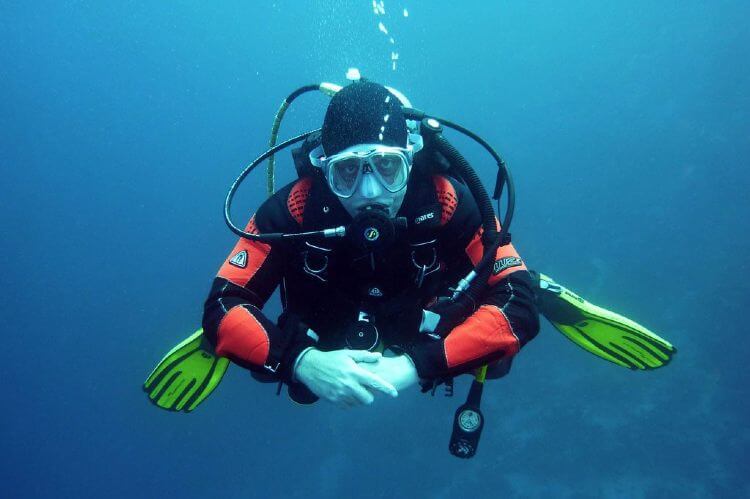 Have you ever wondered why scuba divers have a tank filled with pressurized gas?

When underwater, there is a lot of pressure from the surrounding water acting on the diver. The pressure is so immense that the diver needs to counterbalance this external force to enjoy the diving experience. Not to mention, save themselves from receiving injuries.

There is a law that is at play here – it is called the Boyle’s law. This law determines how the gas in the tank will behave underwater and why it is even required.

You must be a bit confused how it actually applies to scuba diving. Read on to learn more about what this law is all about.

What is Boyle’s Law?

Boyle’s law explains how the volume and pressure of an enclosed gas are interdependent.

Scientists had been studying the relationship between volume and pressure. In the 17th century, Robert Boyle confirmed this relationship through experimentation, and hence, it is called Boyle’s law.

He designed an experiment where he reduced the volume of gas with the help of mercury in an enclosed container. He demonstrated that as the volume inside the container decreased, the gas pressure increased. His inference was that volume and pressure have an inversely proportional relationship.

The Boyle’s law formula is as follows:

The denotations are as follows:

P2V2 could also be replaced with “C”, which represents a Constant (or fixed) value.

Why is There a Necessity For Constant Temperature?

As mentioned earlier, the gas must remain at a constant temperature for the law to hold. It is because gas can easily contract and expand based on the environmental temperatures. This will become more apparent as we discuss how the law helps scuba divers next.

How Does Boyle’s Law Apply to Scuba Diving?

Now, based on what you have read so far about this law, let me see its practical application in scuba diving.

Boyle’s law dictates that the pressure subjected by the surrounding water will compress the air inside the diver’s lungs. The compression reduces the volume occupied by the air and contracts the lung.

When the diver heads back to the surface, the water pressure eases off. In accordance with the law, the air in the lungs starts to increase in volume. It causes the lungs to expand correspondingly. However, the lungs are not physically able to contract and expand so rapidly. That could lead to internal injuries like an organ rupture or failure.

The tank, which is part of scuba gear, is filled with pressurized breathable gas (a mixture of oxygen and nitrogen). When the lungs begin to contract deep underwater, the pressurized gas from the tank compensates for the reducing pressure. It maintains the equilibrium, and so the diver can breathe relatively normally.

A regulator attached to the mouthpiece allows the diver to control the pressure as they dive deeper. The diver then adjusts the regulator to ensure they can breathe normally as the water pressure increases. That is why divers also need to understand the basics of Boyle’s law.

When an individual is undergoing training for scuba diving, they are taught to maintain their breathing pattern. Holding their breath can be very dangerous as the pressurized gas from the tank can’t reach the lungs.

Safety Rules to be Observed

Divers need to consider the below rules when scuba diving:

If you are interested to see how water can apply pressure, you can run a very simple experiment at home using some common items found at home.

Take two buckets. Fill one with water and let the other bucket remain empty. Attempt to lift them simultaneously.

The result is quite evident. The bucket without water is lighter than the one with water. Water and air both have weight, but water is denser and heavier.

When scuba diving, the pressure the water exerts on the diver is actually its weight.


So, this is how Boyle’s law applies to scuba diving. Many aspects of scuba diving rely on similar laws of physics like Charles’ law. Practical knowledge about these combined gas laws is crucial when scuba diving.

Hopefully I have cleared your doubts about Boyle’s law and its application in scuba diving. It is a must for every diver to know the basic principles and how it could help them prevent injuries by understanding the relation between scuba diving and the gas laws.