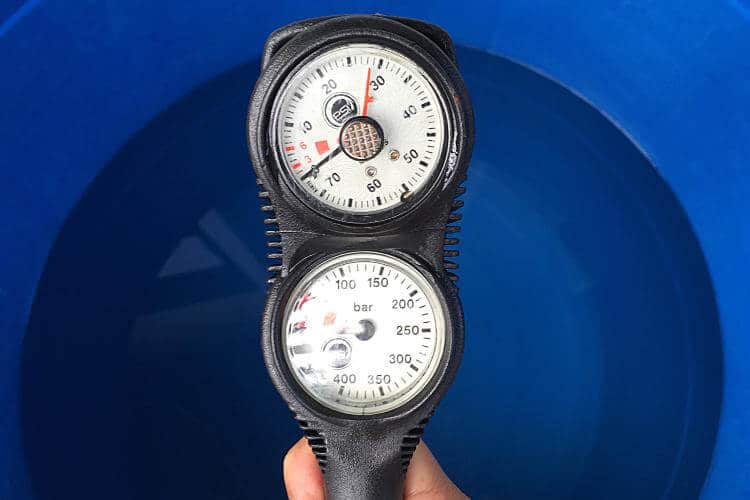 Have you ever found yourself in the middle of an intense debate about which is the superior measurement between pounds and kilograms? No? Either way, both these are right and are universally accepted. And quite often, divers have a somewhat similar conversation.

Knowing the difference between “Bar” and “PSI” is extremely important for divers and scuba enthusiasts. They are both terms of pressure measurements, and most of the diving equipment is manufactured based on them.

They are especially important when measuring the pressure in air tanks. If you are not familiar with these terms, it can be a little frustrating. But don’t worry, because I’m here to help.

In this guide, you will learn what Bar and PSI are and all their key differences.

What is Bar Pressure?

When we say the word “bar,” the first image that will pop up in your head is the place you go to unwind and have a few drinks. However, in scuba diving, this word means more. In fact, “bar pressure” is a word that helps you identify the amount of oxygen left in your tank.

In simple terms, bar pressure is the amount of pressure that the air has. Usually, when you go scuba diving, you will notice that the pressure inside the oxygen tanks is 200 bar. If you notice your tank has a 100 bar, it means that there is half the amount of air inside the tank.

What is PSI Pressure?

PSI is an abbreviation used by scuba divers, and it stands for Pounds per Square Inch. It is an imperial term of measurement. For clear understanding, PSI is equal to 1 pound of pressure per every square inch of space in your scuba tank (lb/in²).

Bar Vs. PSI: Which is the Superior Measurement?

Essentially, bar and PSI are both terms of pressure measurements used in the scuba diving community. Pressure is usually defined as the amount of force applied to a particular area.

If you have scuba diving gear, take a quick look at its pressure gauge. The markings will help you measure the amount of oxygen left in your tank. This pressure is usually measured in PSI (Pounds per Square Inch) or Bar (kilograms per square centimeter).

The only key difference between the two is that the metric system uses bar measurements, and the imperial system (originally from the Anglo-Saxon countries) using the PSI measurements.

Other than their usage, Bar and PSI are essentially the same things. Both these terms work well, and they are both very important to scuba divers.

What is the Formula to Convert PSI to Bar? 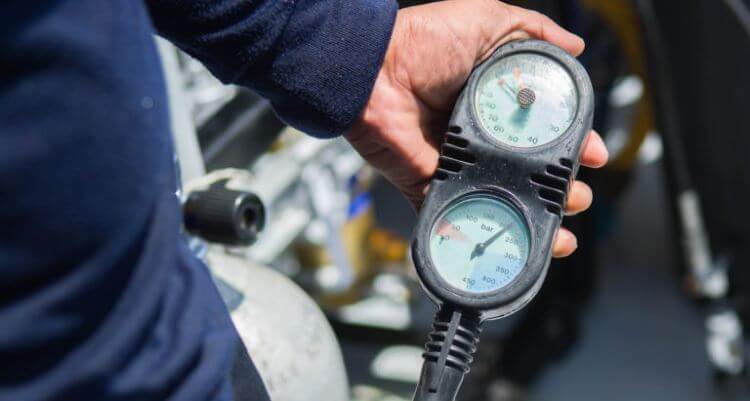 Yes, it is possible to convert PSI to bar measurements if you are well aware of the formula.

If you want to convert Bar to PSI measurements, all you need to do is multiply PSI’s value (Pounds per Square Inch) by 0.0689475728. It is known as the conversion factor.

For better understanding, take a quick look at the examples below:

And it’s as simple as that, folks.

A conversion chart will help you better understand what one measurement of bar converts to as PSI. By taking a look at this chart, you can save yourself a lot of time.

A conversion chart also comes handy for all those who are not particularly fond of doing math. So, let’s look at the bar to PSI conversion till 1000 bar.

Difference Between Bar and PSI – Advantages for Divers

To normal people, the difference between BAR and PSI measurements lies in the metric system. However, to divers, it is beyond that. In fact, the type a diver chooses to use can make his life easier or more problematic. Here’s why.

When a diver uses the bar measurement (the metric system), it makes it easier for him to identify and calculate how many liters of air are still left in their air tanks. As mentioned earlier, a new air tank is filled till it reaches 200 of bar pressure.

Additionally, these bottles have a total air capacity that goes to 10 liters, 12 liters, 15 liters, and so on. One way to find out how many liters of air your scuba tank has is by multiplying the bar measurements in the tank.

In the metric system (Bar), it is quite easy to calculate this. However, in the imperial system (PSI), there are a lot more complex calculations involved.

In other types of diving like technical cave diving, divers opt for tanks that are measured using PSI. The tanks used for this type of diving are filled to 3000 PSI.

Bar and PSI are two very important terms of measurement in the scuba diving community. The difference might be a little confusing at first, but it surely becomes a lot easier once you have understood the concept.

And it’s as easy as that. I hope this guide has given you better clarity on bar and PSI measurements. Have fun diving!